A few days ago I posted the depositions of the Defendants in the Minnesota Drug Recognition Evaluator Program lawsuit.  In this program, the Plaintiffs were picked up in downtown Minneapolis, taken to a building near the Minneapolis - St. Paul Airport and given powerful marijuana that other police had stolen from kids in a park in Dakota County.

One of the important aspects of this case is the human aspect.  I have wondered where we are at in society where people could be treated this way and the perpetrators of the treatment could be so vigorously defended by the government.  Also, I have wondered if the perpetrators ever thought for a bit about their conduct.  If people are homeless, vulnerable, or have other issues, is it really right or fair to give them drugs and run tests on them?  If people are under the influence of illicit drugs, shouldn't they receive some care or medical attention?  Have the people in the government given any thought about how they would feel if they had a family member or loved one who was homeless, had mental health, or other medical issues and were picked up and given street drugs by the police and had tests run on them?  Given what I have seen so far, no remorse has been shown by anyone in the government for any of this conduct.  Actually, these people have asserted they are immune from any of these claims for this conduct.

Since 9/11, there has been a large increase in the number of law enforcement staff.  I am not citing any specific numbers, but I have worked in the criminal justice system in one way or another for over 15 years, so I am relying on my own observation.  This increase in officials has brought on what I can only describe as a near worship of K9 officers (cop dogs).  For example, Minnesota has a special law regarding the killing of a "public safety dog".  I have also noticed that many K9 officers win a lot of awards, such as this one in Roseville, Minnesota: 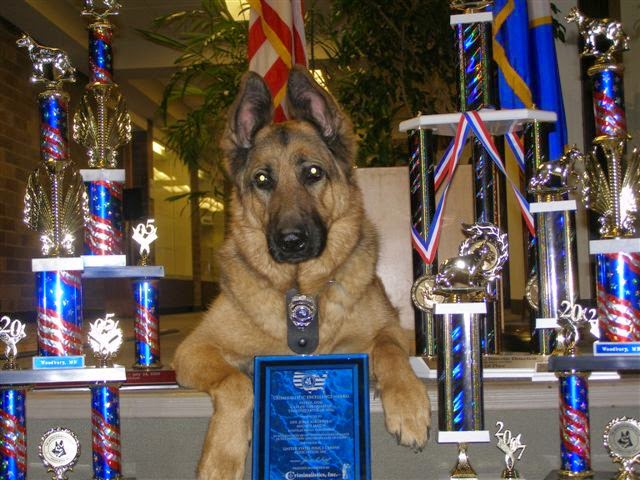 I love dogs and own one I bring to my office nearly every day, and I do not advocate for their mistreatment.  However, all of this seems pretty excessive.  As a taxpayer, I have some concern about all of these public resources being applied to awards for dogs.

It seems to me that the law enforcement defendants in the Drug Recognition Evaluator lawsuit likely cared much more about their dogs than they did my clients, the test subjects of the DRE training program.  My hunch about the feelings of law enforcement that K9 officers are more important and valuable than real people, for example, the test subjects in the DRE training program, was correct, as evidenced by the following exchange on pages 36 to 37 of the sworn deposition of Deputy Michael Hadland of the Fillmore County Sheriff's Department, who is also presently a Minnesota Drug Recognition Evaluator:

A (Hadland): "An officer that has a patrol dog."

Q (by me): "So if a patrol dog -- if you learned that a patrol dog had
ingested illicit drugs, what procedures would you
implement?

A (Hadland): "I couldn't answer that. I'm not a veterinarian. I was
never trained in anything to deal with animals like that."

Q (by me): "Would you bring the dog to a veterinarian?"

Hello from the "FISHERMAN"

They burned my 7 K for #truth #MERICA

Say hello to EARL for me

Say anything for me to him

You're the only EDUCATED SANE MAN I KNOW