Today I visited the Minnesota Department of Transportation's Central Office in St. Paul. The purpose of my visit was a Minnesota Data Practices Act request I had made to MN DOT relating to its project to tax Minnesotans by the miles they drive in their cars and to track their movements and send these movements to a national database.

I was not provided paper copies of documents. I was provided the documents on a laptop computer at MN DOT central office. I was not provided my entire request, just contracts that were requested. The documents were located on the hard-drive of the laptop I was given to use to look at the documents. It was not plugged in, and its battery ran out a few minutes after I started using it. The person assigned to watch me look at the old laptop did not plug it back in. Rather, an attorney for MN DOT appeared, told me I couldn't use a flash drive to get the documents, and plugged the laptop back in.

These documents reveal a contract with intelligence agency front company, a private foundations and other companies of unknown origin and the State of Minnesota. I was only allowed to take pictures of some of the documents with my phone. Negotiations relating to obtaining all of the documents asked for continue. 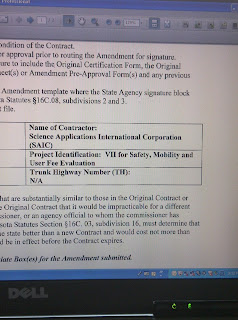 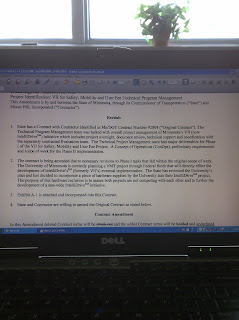 I have several other pictures I will host by FTP for those who are interested.

I have posted previously on this blog about the absurd bureaucracy of the State of Minnesota Department of Agriculture and its cynical interpretation of laws relating to raw milk, which is legal in Minnesota.

Senator Doug Magnus, R-22 has refused many requests from very legitimate activists to meet with him on the issue of raw milk legislation. Many of these people are long time GOP activists who were surprised they were turned down for even a brief meeting.

Senator Magnus, R-22, of Slayton, Minnesota should lose his Republican endorsement for his seat. He does not deserve an endorsement that represents small government and freedom.

If you live this area or have a friend or family member who does, I urge you to look at this issue and decided if Senator Magnus, R-22 of Slayton, Minnesota deserves a Republican endorsement in his community.

Please stay tuned for updates on this most recent data practices act request and food freedom. Please call Senator Magnus' Office at 651.296.5650 and ask him to meet with freedom activists on the issue of raw milk.
Posted by Nathan M. Hansen at 6:29 PM 1 comment: