I started this blog in 2007 as a place to put my data practices act responses from the Minnesota Department of Transportation relating to its membership in NASCO, an organization working to promote a centralized tracking of all transportation in North America. In 2007, the Minnesota Legislature and then-Governor Tim Pawlenty set aside $5 million to begin implementation of this Orwellian Nightmare. Governor Dayton has continued this Orwellian Dream of "Total Domain Awareness" and is now asking for volunteers to begin implementing the program.

There is plenty of money around, the Government spends trillions on wars and bailouts for banks and other businesses. A paranoid elite is not really concerned about money - they control all of the money. They are concerned about control of the population and its movement. The Department of Homeland Security has implemented regional fusion centers for domestic intelligence purposes, and it is mentioned in the original documents that I obtained from MN DOT that this information would be shared with law enforcement.

It does not appear that MN DOT is a member of NASCO anymore, but it appears that this program is marching forward under other auspices. Since it has been four years and MN DOT is now rolling out its transportation tracking program, I figured it was time for a new data practices act request. Here is that request, which I am putting in today's mail: 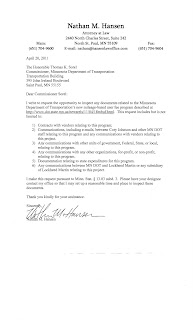 Hopefully MN DOT will be forthcoming with these documents. If they are not, I will pursue my legal remedies to obtain these documents. Don't support any politicians that support these Orwellian programs.
Posted by Nathan M. Hansen at 12:34 PM No comments:

While Tom Emmer was in the Legislature he fought very hard against imposing an anti-free market, anti-patient radiation treatment center moratorium. Now that Emmer is out of elected office he has taken a position as a lobbyist fighting to not only keep the anti-free market law into place, but is working to EXTEND the current moratorium.

Tom Emmer is registered as a lobbyist and is working to continue a moratorium on new cancer treatment centers.

A moratorium against new radiation treatment centers is inherently against the market competition health care system that we believe in and is against the platform that many of us have fought so hard to craft. Not only is Tom Emmer against the free market and the platform, he changed his position when it was politically convenient. He went from pro-free market to being anti-free market. Government regulating private health care delivery is only a tiny sliver of what ObamaCare aims to accomplish.
Posted by Nathan M. Hansen at 7:39 PM 1 comment: