Update on Minnesota Department of Agriculture & its Raw Milk Surge.

The Minnesota Department of Agriculture has adopted the position that the Minnesota Statute permitting the sale of Raw Milk can only be accomplished under the following the circumstances:

1) Directly from a dairy farmer;

2) Sold at a dairy farm, purchased by the consumer directly. One cannot have a friend pick up some milk for you if they are in the area, one cannot hire ANYONE to deliver the milk. Not the farmer's son, not the farmer himself (running a dairy farm is a job that requires constant attention).

4) Consumer must bring their own bottling materials. Forget about buying a nice jug of milk from an already inspected bottling facility. Bring your own jug, bring a bucket, bring your oil pan, bring your cat litter pan, all of these are acceptable over the dreaded farmer bottling the milk.

Is this freedom? Wake up people! Is raw milk legal in Iran? What are Iran's laws on raw milk?

If anyone from the Department of Agriculture disputes any of these distillations of its policies, I will immediately publish their response on this blog. My investigation reveals this summary to be accurate.
Posted by Nathan M. Hansen at 8:15 PM 1 comment: 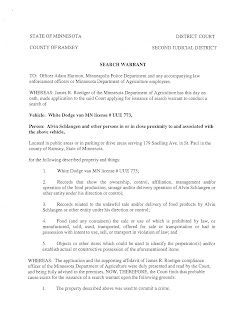 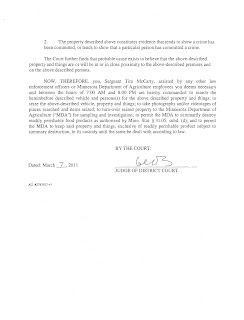 The State of Minnesota is flat broke. In my 14 years of experience in the criminal justice system, many crimes, such as property crimes, are not usually investigated by the Police. I have had police on numerous occasions flatly refuse to investigate car thefts or even take a report. DWI traffic stops, prostitution sting operations, and now private food clubs draw the gaze of the "officials." The United States is now one of the most oppressive police states on earth. The people, the slaves on this plantation, are now the enemy.

One can read the entire search warrant application for Alvin Schlangen here.

Raw Milk is legal in Minnesota. The Minnesota Department of Agriculture has decided to take a cynical view of the law in which they contend that every single person seeking to purchase raw milk should have to individually drive to far away farms to purchase it. In my opinion, this position derives from a Department of Agriculture that is heavily influenced by the Dairy Cartel. Is this position good for the environment? Why bother forcing us to pay for windmills while you force us to waste so much fuel? Is the government completely insane? Yes, it is.

If you look at the search warrant application, you will see that it is not signed by the officer. This is a violation of the Fourth Amendment to the U.S. Constitution, which states as follows:

"The right of the people to be secure in their persons, houses, papers, and effects, against unreasonable searches and seizures, shall not be violated, and no Warrants shall issue, but upon probable cause, supported by Oath or affirmation, and particularly describing the place to be searched, and the persons or things to be seized."

Call your Minnesota representatives and complain about this injustice.
Posted by Nathan M. Hansen at 8:28 AM 2 comments:

At 9:00 this morning, Alvin Schlangen was boxed in near Macalester College. Two St. Paul squad cars and two Department of Agriculture squad cars boxed in Alvin Schlangen's van as he stopped to deliver eggs to a co-op in St. Paul. He was not arrested, but his van was impounded with all of its farm-fresh contents. He was not allowed to deliver eggs to the co-op. His van was taken to 625 Robert Street and remains there with its contents. The people from the Department of Agriculture apparently had a warrant.

The Department of Agriculture indicated that they were stealing all of the contents of Alvin's van. There are 60 families awaiting milk and eggs and other food from Alvin.

Presently at 11:00 a.m. Alvin Schlangen is at the Department of Agriculture Headquarters awaiting word from government officials about what is going to happen to the contents of the truck.

We can see that the Mark Dayton administration is every bit as bad as the Tim Pawlenty administration on the issue of food freedom. Raw milk is legal in Minnesota, the Minnesota Department of Agriculture just doesn't believe people can cooperatively own cows and have milk that they have paid for delivered by an agent of the farmer. As dark people are bombed overseas to bring them freedom, we live in an intolerable police state at home. I have remarked several times that there is likely much more food freedom in Iran than there is in the United States. Further, real food safety threats like high fructose corn syrup and aspartame are never investigated by the "authorities."

Call Governor Mark Dayton today and tell him you don't agree with his police state tactics interfering with food freedom: 651-201-3400.