It was with some despair that I learned that Rep. Tom Emmer has received an endorsement from former Congressman and now longtime Washington, DC lobbyist Vin Weber. In the 1980s, when I was in elementary school and Ronald Reagan was President, I admired Rep. Weber.

By the time I had reached my late 20s (as I write this I am 33), I had come to loathe Vin Weber for views he had endorsed. Specifically, Rep. Weber was a signatory to a document produced by a think-tank calling itself "The Project for a New American Century" called "Rebuilding America's Defenses." Among a veritable treasure trove of neoconservative nuttiness in this document is the following on page 72:

It's these sorts of views that cause me to reject and despise "neoconservatism" with a passion. Weapons designed to kill people based upon their race would be a dream of the worst tyrants in history. I judge people by the content of their character, not their race, color, or creed.

I cannot support anyone affiliated with these insane views.
Posted by Nathan M. Hansen at 7:11 AM 5 comments: 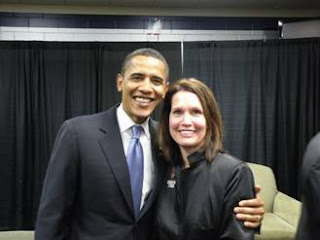 For the past few weeks, I have contacted Congresswoman Betty McCollum's Office several times about the ongoing Predator drone bombings of unknown people in Pakistan. I was alarmed at a Sy Hersh piece I read in the New Yorker and several other pieces I have read about unknown populations of people being bombed by Predator drones in Pakistan. The administration does not officially admit that these killings are going on, but they are widely reported on in Pakistan and around the world. Sometimes over 100 people will be killed in a bombing. I have no idea who these people are, and who is deciding that they should be summarily executed in such a fashion.

These unknown people who reside in this country with whom we are not at war, are referred to by some as "terrorists." It is the Obama administration that is carrying out these attacks. Even if you are to assume for the sake of argument that Pakistan is harboring "terrorists" or even the Devil himself, it is dangerous and unwise to be bombing Pakistan in this way. Pakistan is a country with a population in excess of 160 million people. It possesses nuclear weapons, and it possesses missile technology obtained from North Korea. Ongoing bombings with remote control airplanes is destabilizing, and puts the world at risk.

My very simple questions for Betty McCollum were and are:

1) Does Congresswoman McCollum support the ongoing bombings of Pakistan with Predator drones?; and

Congresswoman McCollum's silence and evasion of these serious questions demonstrate her support for ongoing illegal, murderous and unconstitutional policies. Could she at least speak up for her hard-working constituents to her friend Obama? Should our tax money be used to bomb these people in Pakistan and to murder our own citizens?

Call Rep. Betty McCollum's office today at (202) 225-6631 and ask her what her position is on these issues. Representative McCollum's silence is deafening on this issue. If she is too much of a coward to stand up to her elite controllers, then she doesn't belong in the U.S. House of Representatives for CD 4 in Minnesota.
Posted by Nathan M. Hansen at 1:01 PM No comments:

Today the Minnesota Senate passed a $1 billion bonding bill (SF 2360).In a Legislature controlled by the DFL, this is not surprising.What is surprising and disappointing is that nine “Republicans” voted for this monstrosity.A plan to “create jobs” by borrowing money and spending it on government projects is ridiculous.Government does not create wealth; it merely redistributes and destroys wealth.Here are the NINE “Republican In Name Only” (RINO) Senators who voted for this terrible piece of legislation:

Will borrowing even more money help us even more? I can see Student Government DFL types voting for this nonsense; but not any Republicans. This is why there is a growing resistance in this country against this type of arrogance. Times are tough for people, but for the public sector, the attitude continues to be: "It's my job or yours." Let's hope that this bill is met with stiff resistance in the Minnesota House and that Governor Pawlenty vetoes this terrible bill.We cannot continue to support RINOs representing us in our government.They sell us down the river with more debt and out of control spending. Oust the RINO NINO!
Posted by Nathan M. Hansen at 2:59 PM 2 comments: